Shows what you have logged so far on the current frequency

In a pre-recorded waterfall you see the communication traces and simply click on those to listen to them. Frequency and time position is automatically set.

This is the 4 min waterfall when I started listening in playback mode.

This shows the end of playback session.

Starts Perseus to record at predefined times and frequencies. Afterwards sends PC asleep and wakes it up at the next scheduled time.

kS/s defines what sample rate last to use.

Shutdown PC will let the PC go into standby mode after every defined recording task until the next scheduled recording. This saves power and avoids noise caused by fans and harddisk.

Use this option to prevent any further scheduled shutdowns

Right click a row to connect to that client.

If North and East are filled in then StationList shows only stations within a radius around that geo-location.

Change with the mouse wheel the km radius value to zoom in the station you're hearing.

Use the MWLIST database for this as it contains all worldwide stations.

Leave IP-Adr empty if you only want to set the geo-location to the server site without connecting again.

This is handy when you already connected to the server via Perseus map. 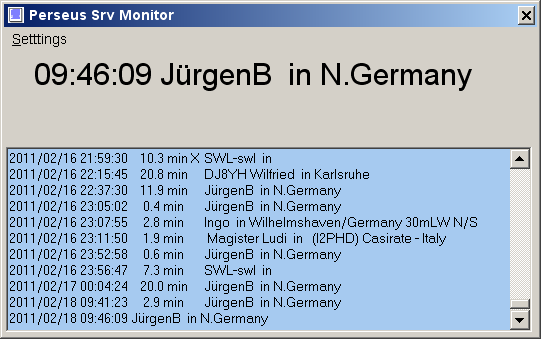 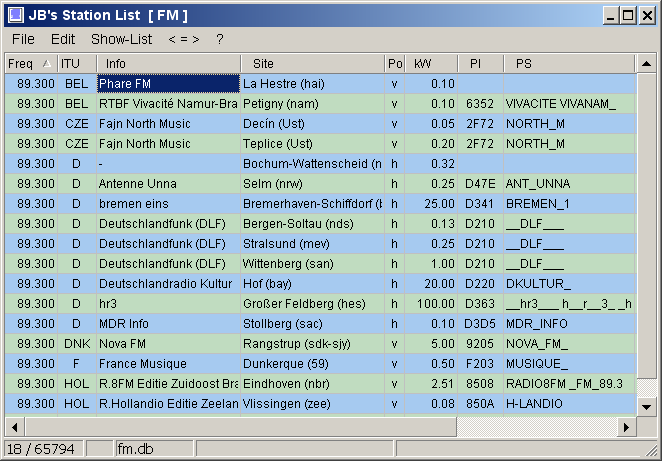 Showing Tx  around remote Tx or on its path towards me 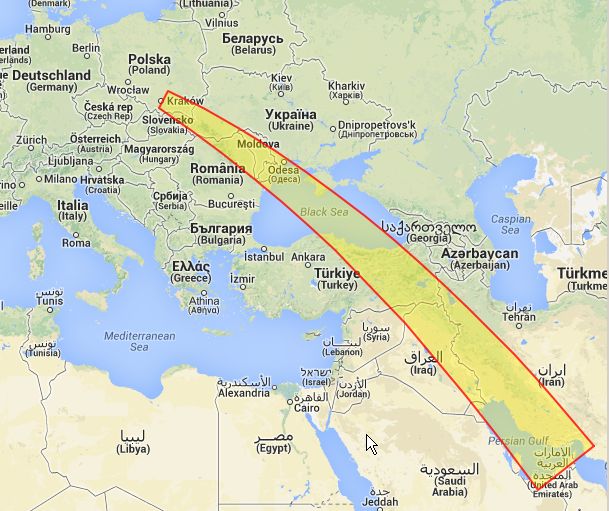 The above map was generated with the below menu.

Example-1: I received TV Dubai on channel E2 via sporadic-E triple hop. In the main form I right-clicked the Dubai entry and selected "Show Tx around Dubai". Then I enabled path, set path-width to 8° and minimal distance to 900km as sporadic-E does not occur on short distances.

The above map clearly shows why I also got TV stations of Iran (double  hop) and Moldovia / Ukraine (single hop) at the same time, They all sit on the same path. 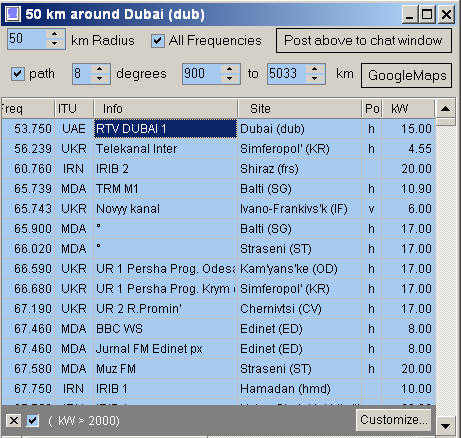 This indicates what stations from other regions could come in. 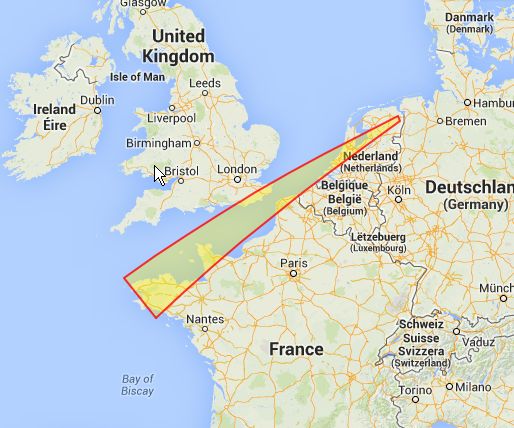 This animated clip shows how the F2 path to the US is set up.

If RDS-PI is detected it also logs that into a table, so you can monitor channels while being away. 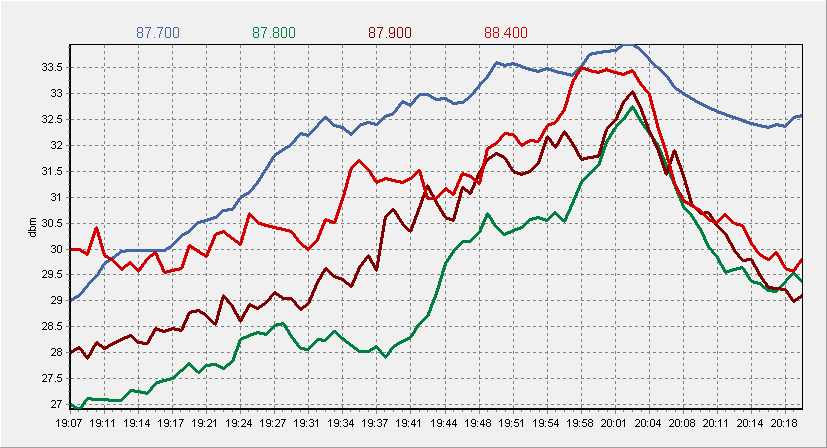 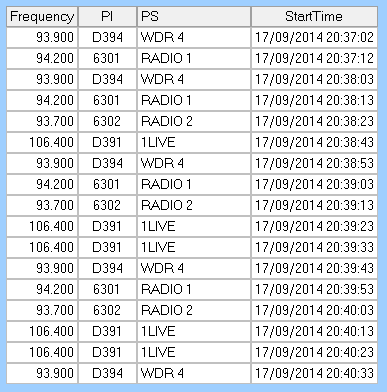 A simpler and faster method to monitor carriers with high precision for live & remote reception and playback. Requires Spectrum-Lab

Calibration is done  locally no matter whether the server is calibrated or not. It takes only a few seconds, also measuring does not take long. Once calibrated you can read off precise values.

More details and instructions you will find in paragraph 20 of the help.

Because the positions on the frequency axis stays at the same place, you can connect to several servers along with your own Perseus and the waterfall traces will line up. Very handy when you need to compare your traces with that of other sites.

In this example I start with my local antenna at the bottom, then I switch over to the servers in UAE, Delhi, South Finland and finally to Brisbane Australia. Notice the Adelaide carrier is visible at all sites except UAE. The other carriers are Ethiopia and Iran.

All servers have been calibrated before. You do it yourself. You don't need special access rights like in Perseus itself.

Setup tips and other documentation are available here

Warning for Perseus users: Do not use VSPE !!

SL communicates with Perseus via virtual com-ports. Use only com0com for maximum reliablity.

A few users have experienced severe Perseus lockups and other problems when using VSPE.

Warning for users of Win7 and higher:

When unpacking with WinZip or Window's built-in unzipper, the help-file becomes unreadable because of Win7 security measures.

Solution: Right-click on StationList.chm, select properties and unblock it. Or simply use WinRar to unpack.

+ time of day filter to reduce number of shown files

now only one UTC menu option instead of two

+ fast tune to harmonics or sub-harmonics of current frequency

+ directly post your logs to the Visual Logbook by a simple mouse click.
See a real world example here

has now become smarter and knows the current playing position

next / prev key will act on the current playing position

- files will start play from that position

- press space to jump back to that position

- frees the spin-control allowing to move the playback position while leaving
unchanged the start position for the next file.

+ available until 1-March, P&S will become a paid option after that

Server will be stopped before each recording and resumes afterwards. So others can use your server in between and you still get your recordings .

- FM+ can be controlled via SL as long as frequency settings are done via SL.

SL uses Perseus.exe for it.

This entry will be shown pink to remind you what you logged the last 6 hours, and prevents you from

re-posting to VLB during this period.

- reduce the shown wav-files to a specific day

When server-geo-coordinates are filled in, the QTH reference is set to those,

and a separate window then shows tx in that vicinity (default: 400km radius).

Distances are shown in respect to that server site.

- Lists only stations located inside the path from a remote tx to your QTH, very useful during sporadic-E.

- In Zoom-mode entries with offset values will be highlighted

Konrad's XDR-GTK (controlling Sony-XDR) uses that, so you can use all SL' features for fast & efficient FM-DXing and perform fast online logging to Visual Logbook. (FMLIST)

Any radio with SRCP can now be controlled. If your radio is missing it then ask its creator

to implement SRCP. It's simple and easy to do.

added: Remote access other DXer's StationList.exe can connect to yours.

Allowing you to listen and operate other Rx that are StationList-controlled. RDS is also streamed. Several users can log on simultaneously, useful if you want to share it with others what you hear.

added Channel-Logger (only for Perseus and SRCP enabled radios)

Google-maps invocation altered after they changed their GUI

Channel-Logger now plots 10 curves at a time, but records as many as you specify

Kanal-Selector: Preset: temporarily tune to that frequency while pressing Shift-Mousedown

many other details improved and quirks fixed

KiwiSDR (web app) support, all shown distances are in respect to the remote Rx QTH

fixed some other nasty issues.

SSL Version increased (to be compatible with MWLIST and FMLIST)

Read what the users say